[Oslo] – Iceland’s retirement income system has been named the world’s best in its debut in the 13th annual Mercer CFA Institute Global Pension Index (MCGPI). The Netherlands and Denmark have taken second and third places respectively, while Norway took 5th place. The study also reveals that there is much that pension systems can do to reduce the gender pension gap – an issue inherent in every system.

The MCGPI is a comprehensive study of global pension systems, accounting for two-thirds (65 per cent) of the world’s population. It benchmarks retirement income systems around the world highlighting some shortcomings in each system and suggests possible areas of reform that would provide more adequate and sustainable retirement benefits. The top three systems, all receiving an A-grade, were sustainable and well-governed systems, providing strong benefits to individuals.

The main reason for Norway’s improvement from a score of 71.2 and 8th place in 2020 to a score of 75.2 and 5th place in 2021 was an increase in the net replacement rates (produced by the Organisation for Economic Co-operation and Development or OECD). The net replacement rate is the percentage of a worker's pre-retirement income that is paid out by a pension system after the worker retires after tax and is an indication of how effectively the pension system can provide adequate income to retirees.

“2021 saw significant changes to the private pension system in Norway with the introduction of Own Pension Account (egen pensjonskonto) but this is unlikely to have made short-term improvements to the strength of the system and impacted it’s score in the this index,” said Tor Olsen, Consultant at Mercer Marsh Benefits Norway.

“In the coming years we expect to see the sustainability of the system improve and the impact of the changes become apparent as Norway still ranks 16th globally for sustainability in 2021, far behind our neighbours Iceland and Denmark who rank first and second,” he said.

President of the CFA Society Norway, Erlend Fredriksen said it’s more important than ever to understand how retirement benefits could be improved in Norway.

“We are happy to see Norway improve in the ratings. However, the study shows there is still work to be done, especially in reducing the gender pension gap. We will work closely with regulators to ensure the strength and sustainability of the Norwegian pension system,” Mr Fredriksen said.

Senior Partner at Mercer and lead author of the study, Dr David Knox, agreed, saying it was imperative for participants in the pension industry globally to act now.

“Governments the world over have responded to COVID-19 with significant levels of economic stimulus, which has added to government debt, reducing the future opportunity for governments to support their aged population. Retirement schemes globally are tipping further towards accumulation-style plans, away from traditional defined benefit plans. Despite the challenges, now is not the time to put the brakes on pension reform – in fact, it’s time to accelerate it. Individuals are having to take more and more responsibility for their own retirement income, and they need strong regulation and governance to be supported and protected,” Dr Knox said.

The MCGPI’s analysis highlighted that there was no single cause of the gender pension gap across the 43 markets, despite all regions having significant differences in the level of retirement income across genders.

“The gender pension gap in Norway is striking and while there can be many varied causes, one in particular relates to the level of government support for lower income earners in retirement, a high proportion of which have shown to be women. Denmark historically has higher net replacement rates for low income retirees than in Norway, suggesting their system may provide greater support for this category of workers,” said Annabell Siem Mathiesen, CEO of Mercer Norway.

On a global level, Dr Knox agreed adding, “While employment issues are major contributors and are well known – more female part-time workers, periods out of the workforce for caring responsibilities and lower average salaries, for example – the study found that pension design flaws were aggravating the issue. This includes non-mandatory accrual of pension benefits during parental leave, absence of pension credits while caring for young children or elderly parents in most systems, and the lack of indexation of pensions during retirement, which have a larger impact on women due to longer life expectancy.

“We know that closing the gender pension gap is an enormous challenge given the close link of the pension to employment and income patterns. But, with poverty among the aged more common for women, we can’t afford to sit idle,” said Dr Knox.

“There are a number of actions that pension industries can take. As a start, they must remove eligibility restrictions for individuals to join employment-related pension arrangements. Regardless of how much you earn, how much you work or how long you’ve been working for, every individual should have the ability to participate in a pension scheme that provides adequate benefits.

“Pension funds can also introduce credits for those caring for the young and old. Carers provide a valuable service to the community and shouldn’t be penalized in their retirement years for taking time out of the formal workforce,” he said.

In comparison to 2020, China and the UK showed the most improvement as a result of significant pension reform, which improved outcomes for individuals and pension regulation. 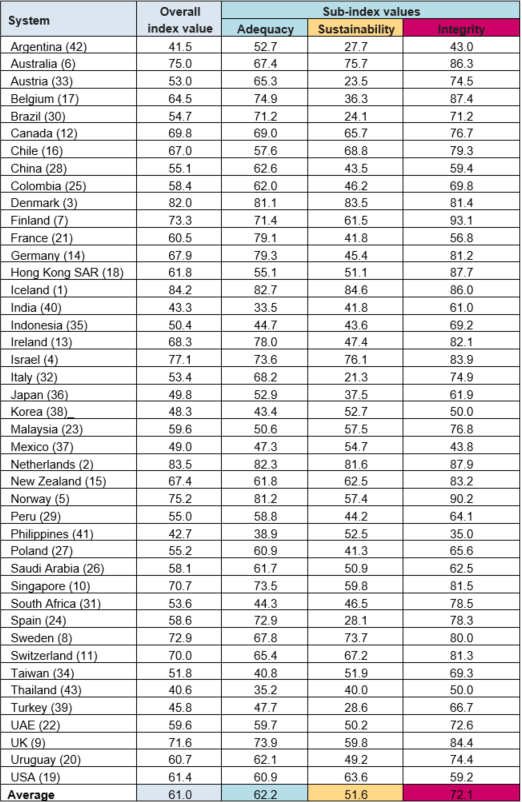 The Global Pension Index benchmarks retirement income systems around the world highlighting some shortcomings in each system and suggests possible areas of reform that would provide more adequate and sustainable retirement benefits.

The Global Pension Index is a collaborative research project sponsored by CFA Institute, the global association of investment professionals, in collaboration with theMonash Centre for Financial Studies (MCFS), part of Monash Business School at Monash University, and Mercer, a global leader in redefining the world of work and reshaping retirement and investment outcomes.

The Global Pension Index uses the weighted average of the sub-indices of adequacy, sustainability and integrity to measure each retirement system against more than 50 indicators.

Mercer believes in building brighter futures by redefining the world of work, reshaping retirement and investment outcomes, and unlocking real health and well-being.Mercer’s approximately 25,000 employees are based in 43 countries and the firm operates in 130 countries. Mercer is a business of Marsh McLennan(NYSE: MMC), the world’s leading professional services firm in the areas of risk, strategy and people, with 78,000 colleagues and annual revenue of over $18 billion. Through its market-leading businesses includingMarsh, Guy CarpenterandOliver Wyman, Marsh McLennan helps clients navigate an increasingly dynamic and complex environment. For more information, visit www.mercer.com. Follow Mercer on Twitter @Mercer.

CFA Institute is the global association of investment professionals that sets the standard for professional excellence and credentials. The organization is a champion of ethical behavior in investment markets and a respected source of knowledge in the global financial community. Our aim is to create an environment where investors’ interests come first, markets function at their best, and economies grow. There are more than 175,000 CFA® charterholders worldwide in more than 160 markets. CFA Institute has nine offices worldwide and there are 160 local societies. For more information, visit www.cfainstitute.org or follow us on Linkedin and Twitter at @CFAInstitute.

About the Monash Centre for Financial Studies (MCFS)

A research centre based within Monash University's Monash Business School, Australia, the MCFS aims to bring academic rigour into researching issues of practical relevance to the financial industry. Additionally, through its engagement programs, it facilitates two-way exchange of knowledge between academics and practitioners. The Centre’s developing research agenda is broad but has a current concentration on issues relevant to the asset management industry, including retirement savings, sustainable finance and technological disruption.