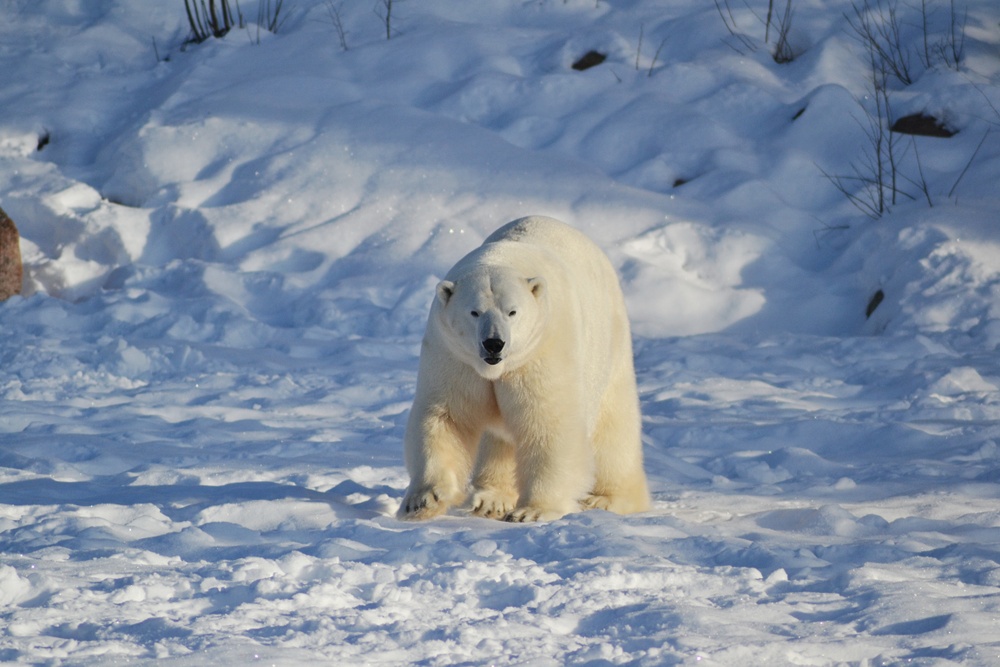 The polar bear Wilbär, which is now a father of a newborn cub.

Click here to see a video of Ewa and her newborn Cub.

For a version in Swedish, please see visit our website.

On Thursday December 3, a long-awaited cry was heard from the den at Orsa Rovdjurspark – a polar bear had been born.

The birth of a cub is a great success for both Orsa Rovdjurspark and the polar bear as a species, says the Zoo manager Pernilla Thalin. For many years, we have dedicated enormous resources and commitment in an attempt to increase our polar bear population here at the park.

The female polar bear Ewa has spent much of her time resting in the den recently. She has remained there night and day and has been seen bedding in the straw.

We realised straight away that something exciting and wonderful had happened when we heard the cry, continues Pernilla. We have been watching Ewa via a camera in the den, monitoring developments together on a minute-by-minute basis.

Right now, we have been a bit nervous to say the least as we have watched footage of Ewa, who weighs around 320 kilograms, carefully tending to her young cub who weighs about half a kilogram. It certainly is an extraordinary experience.

However, Pernilla is very cautious regarding the recent birth:

We are keenly aware of the risks faced by this new arrival. It is extremely rare for polar bears in zoo´s to give birth, and many cubs do not survive the initial critical period. Only around half of all new-born polar bear cubs make it through the first couple of weeks.

Ewa has demonstrated good parenting and caring skills during the first week, and the keepers have heard and seen a cub suckling, sleeping and crying loudly next to its mother.

It is essential that Ewa gets as much peace and quiet as possible, so we are not entering the den. We are currently monitoring her closely via a camera that captures movement and sound.

Polar bears face a number of threats in the wild. The main threat is deemed to be melting sea ice, which makes it hard for them to hunt and find food. The polar bears at Orsa Rovdjurspark are part of a vitally important conservation project managed by the European Association of Zoos and Aquaria (EAZA).

By holding polar bears, the park has a unique opportunity to educate, inform and hopefully inspire the public to learn more about the species and the threats it faces.

About the polar bears at Orsa Rovdjurspark

Since 2009, Orsa Rovdjurspark has been home to Ewa and Wilbär, who arrived at the park from Ouwehands Zoo in the Netherlands and Stuttgart Zoo in Germany. Another female, Hope, came here in 2018 from Antibes Zoo in France.

About polar bear births at other wildlife parks

The European Endangered Species Programme (EEP) includes 153 polar bears at 59 zoo´s. Worldwide, there are 282 polar bears at zoo´s. Twenty-four cubs were born within the EEP in 2019, and 13 of these survived.

GlobeNewswire is one of the world's largest newswire distribution networks, specializing in the delivery of corporate press releases financial disclosures and multimedia content to the media, investment community, individual investors and the general public.

Subscribe to all the latest releases from GlobeNewswire by registering your e-mail address below. You can unsubscribe at any time.

PRESS RELEASE: NACON AND CREĀ -TURE STUDIOS TEAM UP FOR THE PUBLISHING AND DISTRIBUTION OF SESSION.18.1.2021 17:45:00 CET | Press release

NACON AND CREĀ -TURE STUDIOS TEAM UP FOR THE PUBLISHING AND DISTRIBUTION OF SESSION. Lesquin, 18 January 2021 – NACON and creā-ture Studios are pleased to announce that they are joining forces for the publishing and distribution of the game Session:Skateboarding Sim Game, a new skateboarding simulation, currently available in early access. With more than 85% of positive reviews on Steam, the game is eagerly awaited due to its immersive experience and innovative gameplay. Session. is an authentic and realistic simulation for skateboarding fans. It is currently being developed by the Montreal studio creā-ture, founded by Marc-André Houde and Vincent Da Silva, two video-game veterans and experienced skateboarders. The game is available in early access on Steam (PC) and on Xbox One / Xbox Series X|S consoles in Game Preview version. It is already being widely hailed by players for its quality and realism, and looks set to become the new reference for the genre. The world of Session. celebr

* Bid procedure, 2021-01-20CertificateCommercial paper issued in SEK by non-financial companies with their registered office in Sweden and with a remaining maturity of up to six months on the Bid date. i.e. with the latest maturity date as of 2021-07-20 Delivery may not be made in commercial paper purchased by the Counterparty from the issuer less than one week prior to the date for announcing the Special terms, i.e. the purchase may not have been made after 2021-01-11 BidsCounterparties may make one bid per Credit rating class and maturity class. Bids are made to tel 08-696 69 70 and confirmed by e-mail to EOL@riksbank.se.Bid date2021-01-20Bid times09.00-09.30 (CET/CEST) on the Bid dateRequested volume (corresponding nominal amount)SEK 4 billionHighest permitted bid volume (corresponding nominal amount)The total bid volume from one Counterparty for the two Credit rating classes may not exceed SEK 4 billion. No bid may contain Commercial paper in excess of SEK 250 million issued by the

Suominen Corporation: Notification of change in holdings according to chapter 9, section 10 of the Securities Market Act18.1.2021 15:00:00 CET | Press release

TAALERI PLC PRESS RELEASE 18 JANUARY 2021 AT 15.30 (EET) Taaleri SolarWind II fund invests in two ready-to-build wind farms in Poland with a combined capacity of 51.4 MW The Taaleri SolarWind II fund has, together with Masdar, one of the world’s leading renewable energy companies, acquired 100% ownership of the Mlawa and Grajewo wind farms. The wind farms are located in Northern Poland in the counties of Mazowieckie and Podlaskie. Masdar is Taaleri Energia’s joint venture partner in the CEE region. Construction works on both wind farms started in June 2020. With 24 Vestas V110 turbines, the wind farms will have a combined installed capacity of 51.4 MW and the combined annual production of electricity will be approximately 192 GWh. The wind farms will produce enough electricity to supply around 90000 households and will offset the equivalent of 146,000 tonnes of carbon dioxide during each year of operation. The projects were developed by Vestas together with V-Ridium Power Services. V-R

Avance Gas Holding Ltd (OSE: "AGAS", or the "Company") today announces that it has entered into shipbuilding contracts for two 91,000 CBM, LPG Dual-Fuel VLGCs with Daewoo Shipbuilding and Marine Engineering (DSME) in South Korea, for delivery Q4 2022 and Q1 2023. The investment enhances the green profile of the Avance Gas fleet, allowing the company to take another important step towards de-carbonisation while contributing to a greener shipping industry and achieving the targeted 40% reduction in emissions by 2030. The new vessels are capable of burning LPG, have larger intake and lower daily consumption. They will also be fitted with shaft generator further enhancing emissions reduction for an even greater greener profile. The outlook for the freight market remains healthy, supported by continued strong US LPG exports and growing Asian demand. The price and terms are attractive and we expect that the vessels will also secure attractive financing in line with their environmentally frie